An insight into American life and culture

Stepping out of Logan Airport, Boston, MA on the 1st of October 2019, we finally began our much anticipated studytrip. We had been looking forward to this exact day for more than 2 years, the day where we were together as a class in a foreign country, on new territory, although as well prepared as possible.

Because with Boston, US as our destination, we had learned all about the country, the city and culture, all of which we would finally be able to test out in real life.

We spent the first 5 days in the city of Boston, where we got to experience a so-called Duck-tour, visit the Museum of Science and walk around the campus of MIT (Massachusetts Institute of Technology) and Harvard. On our Duck-tour, which is something as simple as a amphibious vehicle driving and sailing around the city with a guide, we were able to see parts of the city, that we would never have seen otherwise. The guide truly managed in the best humoristic ways to capture his audience, 3y, and in a way make us all feel welcomed by the city.

Visiting the Museum of Science we all got to feel a little like children again. I think all of us were having flashbacks to visits at our very own Danish Eksperimentarium. Because while watching a much bigger, crazier lightning-show that we in this small country could ever muster, we were told all about the magnificence of lightning.

In the following days we visited both the campi of MIT and Harvard. After an impressive tour around MIT, we were lucky enough to have the opportunity to meet a scientist, who were happy to tell us about his life and studies at MIT. With our main subjects being mathematics and physics, it felt both relevant and reminded us all why we originally chose these subjects, and by that what we all have in common.

On Saturday the 5th of October we were picked up in a traditional American school bus, which would drive us to Marion, where our partner school, Tabor Academy, is located. A teacher and two of the students who had stayed with us in Denmark in March came to pick us up. One of them being the girl, Daisy who had stayed with me, and whom I became very good friends with. While driving to Tabor Academy, where we would be spending the rest of the trip with our host-families, we caught up with one another.

While some stayed on campus others lived in the nearby villages. I got to stay on campus with the Long family, a family of 6 with my host, Paige as the oldest daughter. This is where an incredibly educational experience began. Because in just under a week I, not only got to know more about the reality of American culture, but also to get an incredible insight into what an American family can be like in real life.

When I left Tabor Academy, I felt almost as if I left my own family behind. This feeling insured me that when people would ask about my trip to the US, I would not just be able to answer “I got to see America”. I would answer “I gained a family, who has given me an almost surprisingly so, incredible insight into true American life and culture.” 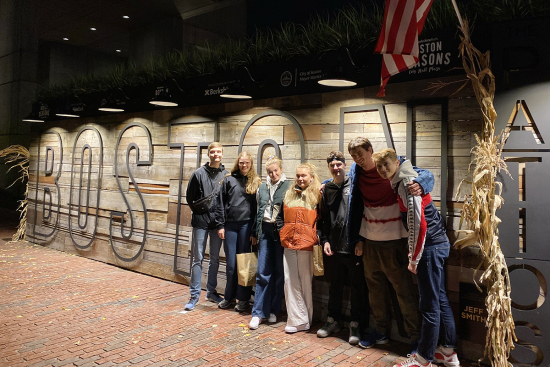